Daredevil vol. 17: Hell to Pay vol. 2 by Brubaker and Lark 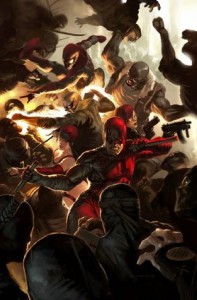 Okay, so I was going to make this another huge, rage-filled review, complete with panels as examples, etc. And that was just too draining. So I'm just going to go over the basics with this: Milla, under the influence of Mr. Fear's gas, which made Milla insane and also somehow made him into the Purple Man instead of a second-rate Marvel version of Scarecrow from the Batman comics, sorta kinda tried to kill someone she felt was threatening her relationship with Matt, and she's going to be charged with murder, because everyone on the subway platform apparently heard her yell DIE BITCH but neglected to note that she was a blind woman flailing at the air, and that it was actually Lily, trying to avoid Milla, who inadvertently knocked the man in front of the train. Brubaker both wants you to forget that Milla wasn't directly responsible, but also make certain that she wasn't, which is highly confusing.

The panels of Milla in the hospital are painful. Foggy and Matt talk about her in third person right in front of her, and when she loudly objects, they do that, SHHH YOU'RE JUST HYSTERICAL sort of thing that infuriates women about men. Honestly, if I showed these to women who had no idea about the situation, they'd guess that a husband was trying to gaslight his wife, it's that bad.

Well, Matt's a lawyer, so he gets her released into his custody, and she doesn't do anything but try to hurt herself. But, guess what? Lily shows up again, and her pheromone comic book nonsense suddenly makes Milla lash out against a totally innocent woman, her nurse, which is not at all indicative of what we've seen of her behavior to this point. And, as with all Daredevil trauma and tragedy, Matt makes everything about himself as his wife is stuck in Hell in her own mind.

And then the crowning jewel of the nastiness of this comic is the panels at the end, to show that Mr. Fear has truly won, that he is basically running the prison where he's been put away, including one where he has a female guard in a sexy Halloween costume parody of a cop's uniform, spread seductively on his bed because, again, he's made himself the Purple Man and she's scrambling to throw herself at him. So we end with rape, implied consistent.

And Ed Brubaker is trash.